React with Typescript is part 2 of a 5 parts React with ASP.NET Core series. This series will show you the setup necessary for building React single page application with routing and server-side rendering.

Check TypeScript Deep Dive out as for Why TypeScript. It also has a lot of other resources about Typescript.

I have been using many strongly typed languages like C++, C#, Java, Swift for many years and also enjoy the flexibility javascript provides. While still with some skepticism, I decided to move forward with Typescript. I haven’t looked back.

We really benefit from catching a lot of errors/potential bugs during development with type checking. And more often than not, when we did hit some bugs, those are the break points when we were getting lazy and try to skip some type checking using the type any. That’s when we got those undefined objects and causing errors. While defining types in Typescript could be tedious and sometimes hard to comprehend when the types are complex, I preferred this tedious over those undefined objects or hidden bugs that could drag you for nights.

There were also a problem with types compatibility. There may be some older libraries you want to use but do not have type definitions. Or there could be type conflicts with Visual Studio’s Typescript support. These issues can drive you crazy. But Typescript support has since improved a lot and is getting better and better.

React with Typescript, Get Started

Goal: Use react with typescript to display a simple HelloWorld component.

The setup will base off on the example codes from part 1 React with ASP.NET Core, Get started using Visual Studio . With this base project codes, we can already run React components with ASP.NET Core with basic webpack settings. It has project structure as shown below: 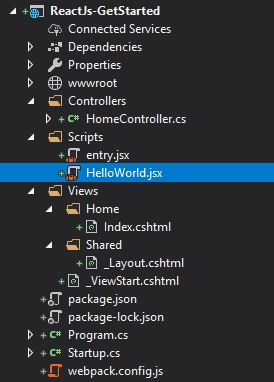 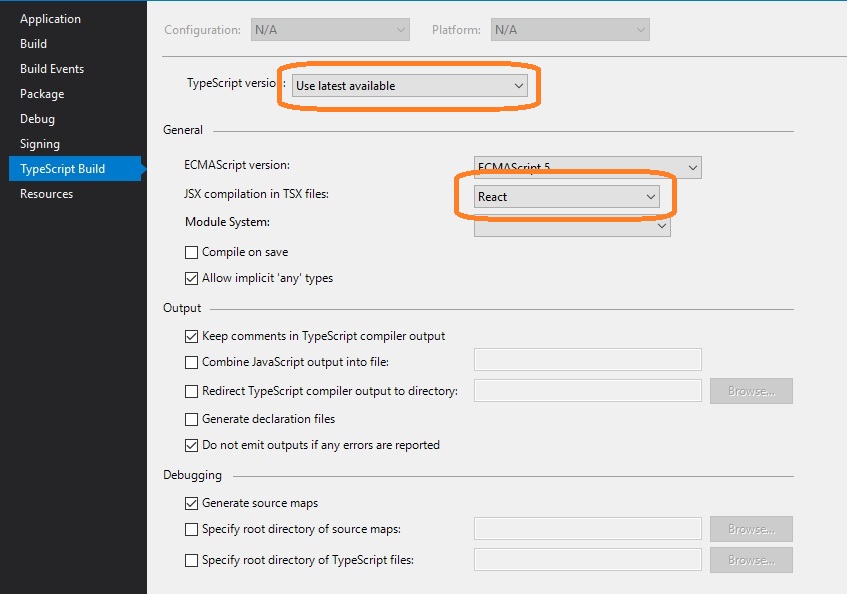 Add the two packages to package.json inside devDependencies

Next ts-loader needs a typescript config file tsconfig.json. Add it under your project

Finally, modify the webpack.config.js as shown to use the ts-loader:

The project should now be ready to build and run react with typescript. (VS Build and  Task Runner Explorer > Run - Development)

Example code for React with ASP.NET Core series – Part 2 is available at Github.